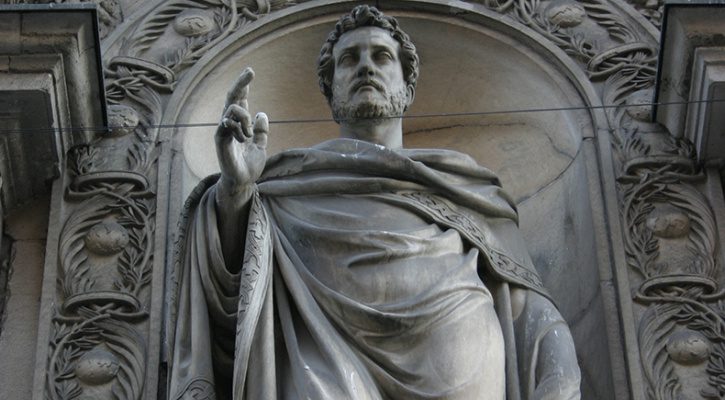 Saint of the Day for December 7

One of Ambrose’s biographers observed that at the Last Judgment, people would still be divided between those who admired Ambrose and those who heartily disliked him. He emerges as the man of action who cut a furrow through the lives of his contemporaries. Even royal personages were numbered among those who were to suffer crushing divine punishments for standing in Ambrose’s way.

When the Empress Justina attempted to wrest two basilicas from Ambrose’s Catholics and give them to the Arians, he dared the eunuchs of the court to execute him. His own people rallied behind him in the face of imperial troops. In the midst of riots, he both spurred and calmed his people with bewitching new hymns set to exciting Eastern melodies.

In his disputes with the Emperor Auxentius, he coined the principle: “The emperor is in the Church, not above the Church.” He publicly admonished Emperor Theodosius for the massacre of 7,000 innocent people. The emperor did public penance for his crime. This was Ambrose, the fighter sent to Milan as Roman governor, and chosen while yet a catechumen to be the people’s bishop.

There is yet another side of Ambrose—one which influenced Augustine of Hippo, whom Ambrose converted. Ambrose was a passionate little man with a high forehead, a long melancholy face, and great eyes. We can picture him as a frail figure clasping the codex of sacred Scripture. This was the Ambrose of aristocratic heritage and learning.

Augustine found the oratory of Ambrose less soothing and entertaining but far more learned than that of other contemporaries. Ambrose’s sermons were often modeled on Cicero, and his ideas betrayed the influence of contemporary thinkers and philosophers. He had no scruples in borrowing at length from pagan authors. He gloried in the pulpit in his ability to parade his spoils—“gold of the Egyptians”—taken over from the pagan philosophers.

His sermons, his writings, and his personal life reveal him as an otherworldly man involved in the great issues of his day. Humanity for Ambrose was, above all, spirit. In order to think rightly of God and the human soul, the closest thing to God, no material reality at all was to be dwelt upon. He was an enthusiastic champion of consecrated virginity.

The influence of Ambrose on Augustine will always be open for discussion. The Confessions reveal some manly, brusque encounters between Ambrose and Augustine, but there can be no doubt of Augustine’s profound esteem for the learned bishop.

Neither is there any doubt that Saint Monica loved Ambrose as an angel of God who uprooted her son from his former ways and led him to his convictions about Christ. It was Ambrose, after all, who placed his hands on the shoulders of the naked Augustine as he descended into the baptismal fountain to put on Christ.

Ambrose exemplifies for us the truly catholic character of Christianity. He is a man steeped in the learning, law, and culture of the ancients and of his contemporaries. Yet, in the midst of active involvement in this world, this thought runs through Ambrose’s life and preaching: The hidden meaning of the Scriptures calls our spirit to rise to another world.

Saint Ambrose is the Patron Saint of: