“The only true riches are those that make us rich in virtue.”
Saint Gregory the Great

Gregory lived in Rome during a period of wars, invasions by hostile tribes, famine, and destruction. He was the son of Gordianus, a wealthy Roman senator. Like most of the upper class of his time, he was well educated. But unlike many, he was generous and concerned about the poor. 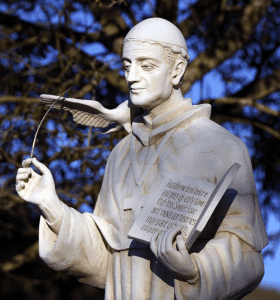 When he was in his early 30s, Gregory was made the chief prefect, or governor, of Rome. He had long been attracted to the religious life, however, and so left his position before very long. He converted the family estate in Rome into the Abbey of St. Andrew, became a monk there, and founded six Benedictine monasteries on his estates in Sicily. His life of quiet and prayer did not last long; for around 578 he was ordained one of the seven deacons of Rome and sent as the papal ambassador to Constantinople, where he served until 585. When he arrived back in Rome, he was made the abbot of St. Andrew’s.

Five years later the pope died, and Gregory was acclaimed pope by the clergy and the people of Rome. Unwillingly Gregory accepted the role. He was the first pope to call himself the “servant of the servants of God.” But Gregory was such a good leader that he became known as Gregory the Great.

Because of his political skill, learning, talents, and deep devotion to God, Gregory was able to make peace with the invading Lombards, save the city from famine by reorganizing the property and granaries of the Church, and restore order within the Church itself. Even though there were tremendous problems in Rome, Gregory was able to look beyond his land to the needs of people in foreign lands. He sent a group of monks to England to teach the faith to the people who lived there. So great was Gregory’s interest in them that he has come to be called the Apostle of England, even though he himself was unable to travel there to preach.

What really made Pope Gregory great? His achievements were many and had a widespread effect, but Gregory became a saint because of his love for God, which was reflected in all that he did.

“Gregorian chant is the church’s own music, born in the church’s liturgy. Its texts are almost entirely scriptural, coming for the most part from the Psalter. For centuries it was sung as pure melody, in unison, and without accompaniment, and this is still the best way to sing chant if possible. It was composed entirely in Latin; and because its melodies are so closely tied to Latin accents and word meanings, it is best to sing it in Latin. (Among possible exceptions are chant hymns, since the melodies are formulaic and are not intrinsically tied to the Latin text.) Gregorian chant is in free rhythm, without meter or time signature.”

Excerpt From;  “What is Gregorian Chant?”

The History of our Parish