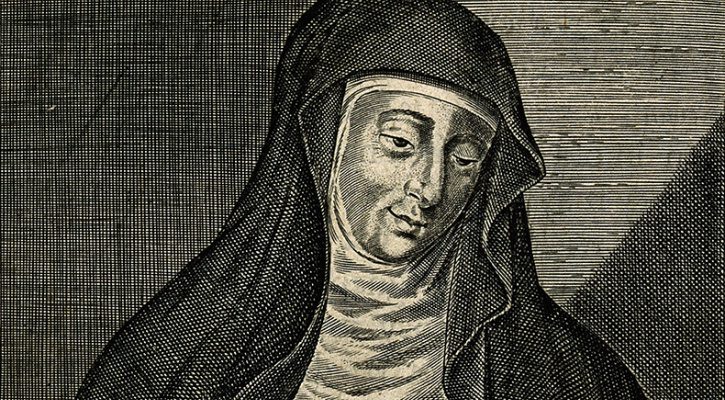 Saint of the Day for December 17

Born into a noble family, she was instructed for ten years by the holy woman Blessed Jutta. When Hildegard was 18, she became a Benedictine nun at the Monastery of Saint Disibodenberg. Ordered by her confessor to write down the visions that she had received since the age of three, Hildegard took ten years to write her Scivias (Know the Ways). Pope Eugene III read it, and in 1147, encouraged her to continue writing. Her Book of the Merits of Life and Book of Divine Works followed. She wrote over 300 letters to people who sought her advice; she also composed short works on medicine and physiology, and sought advice from contemporaries such as Saint Bernard of Clairvaux.

Hildegard’s visions caused her to see humans as “living sparks” of God’s love, coming from God as daylight comes from the sun. Sin destroyed the original harmony of creation; Christ’s redeeming death and resurrection opened up new possibilities. Virtuous living reduces the estrangement from God and others that sin causes.

Like all mystics, Hildegard saw the harmony of God’s creation and the place of women and men in that. This unity was not apparent to many of her contemporaries.

Hildegard was no stranger to controversy. The monks near her original foundation protested vigorously when she moved her monastery to Bingen, overlooking the Rhine River. She confronted Emperor Frederick Barbarossa for supporting at least three antipopes. Hildegard challenged the Cathars, who rejected the Catholic Church claiming to follow a more pure Christianity.

Between 1152 and 1162, Hildegard often preached in the Rhineland. Her monastery was placed under interdict because she had permitted the burial of a young man who had been excommunicated. She insisted that he had been reconciled with the Church and had received its sacraments before dying. Hildegard protested bitterly when the local bishop forbade the celebration of or reception of the Eucharist at the Bingen monastery, a sanction that was lifted only a few months before her death.

In 2012, Hildegard was canonized and named a Doctor of the Church by Pope Benedict XVI. Her liturgical feast is celebrated on September 17.

Pope Benedict spoke about Hildegard of Bingen during two of his general audiences in September 2010. He praised the humility with which she received God’s gifts, and the obedience she gave Church authorities. He praised too the “rich theological content” of her mystical visions that sum up the history of salvation from creation to the end of time.

During his papacy, Pope Benedict XVI said, “Let us always invoke the Holy Spirit, so that he may inspire in the Church holy and courageous women like Saint Hildegard of Bingen who, developing the gifts they have received from God, make their own special and valuable contribution to the spiritual development of our communities and of the Church in our time.”

Click here for more on Saint Hildegard of Bingen!